Similar to last year, massive rains mixed things up for the athletes. But unlike last year, the rain came on race day this time around. Athletes fought their way through rain, mud, thunder, and amazing single track as they completed a 1500m swim, 32km water-logged mountain bike, and a 10km trail run. This was another example of how off-road triathlon is not only competitor versus another, but competitor vs competitor vs the course.

Deanna McCurdy was the top finisher for the women, clocking in at 3 hours, 5 minutes, 22 seconds to claim the overall win and the women’s 40-44 age-group title. She crossed the line more than 10 minutes ahead of Courtney Kaup (Richmond, Vt.), who placed second overall in 3:16:00 and successfully defended her women’s 35-39 title. Jane Zeigler (Tulsa, Okla.) rounded out the overall podium in third with a time of 3:18:04.

“It was so much fun. Running and biking upstream made for an exciting day,” McCurdy said. “The bike was a blast, it was a roller coaster out there. In Colorado we’re used to climbing for miles and miles, but here it was fast, it was flowy. The run course was fun, splashing through puddles. You just had to be a kid. If you think about how much it hurts and how tired you are, your race is over. But if you just play, it’s an adventure.”

“All the stars aligned for this race. It was an all out slugfest. Rain, mud, heat, and humidity all made for a perfect recipe for an epic off-road triathlon. I stayed patient on the bike sitting behind what I thought was 2nd. I made my move with 5 miles to go, trying to catch 1st. After eating multiple spider webs, I realized I was chasing a ghost. Hit transition in 1st with a good gap and I still had the legs. So, I put my chips all in for the run. I was lucky to have pocket aces to come away with the win!” – Dane Baldini, Overall Winner.

“It was an outstanding race. It rained the night before creating hero dirt and a fast course. A little over half-way through the bike it started POURING rain, complete with thunder. The single-track trail became a single-track river. It’s a true XTERRA with rocky, technical riding and running. Someone who can handle technicality through curvy, trails, will do good at this race.” – Marcus Barton, 1st place in the male 45-49 age category.

“You had to close your eye while riding otherwise you would get too much mud in them. It hurt to much to keep them open. We were splashing through ankle deep water for 5 miles on the run.” – John Royson, 3rd place in the male 60-64 age category.

About USA Triathlon
USA Triathlon is proud to serve as the National Governing Body for triathlon, as well as duathlon, aquathlon, aquabike, winter triathlon, off-road triathlon and paratriathlon in the United States. Founded in 1982, USA Triathlon sanctions more than 4,300 races and connects with nearly 500,000 members each year, making it the largest multisport organization in the world. In addition to its work with athletes, coaches, and race directors on the grassroots level, USA Triathlon provides leadership and support to elite athletes competing at international events, including International Triathlon Union (ITU) World Championships, Pan American Games and the Olympic and Paralympic Games. USA Triathlon is a proud member of the ITU and the United States Olympic Committee (USOC). 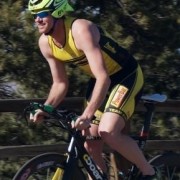